Goofy pets. They couldn’t wait for the fort blankets to go on, the panels around the side to get clipped in place, and for everyone to stop moving around inside the fort. Once the “Toy Fort of the Weekend” Version 3 was built, 2 cats and a dog wasted no time in settling in. Hadn’t seen them for an hour or so, but that’s where they were until the girls got home from the football game. They built it with friends before the game so they’d have their fort to slumber in later. The rigged up the lights for when they came home late to a dark living room.

So, if you are building your living room fort and can’t find the pets, look inside. Make sure to leave them a space. They’ll appreciate it. Also, know they do not respect boundaries with pillows, special quilts, socks and snacks in the fort.

This was round three of forts this day in the same room. The first round was created by Austin and Ellie while they talked about the things that 5th graders talk about. They headed outside after they were done. Their version included a “bathroom” area – which set them to giggles. Then, I was on a conference call and fidgety. I decided to raise their fort an extra level to see how smoothly that would go. I’ll admit with a 10′ fort, it was hard for one person to raise it up without some extra thinking, but I did it. Austin and Ellie came back in and were delighted! Ellie left. 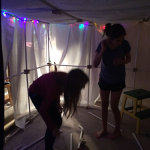 Enter Blythe whose eyes got SOO BIG – she jumped up and down, clapped her hands and dove in with Savannah – 8th graders. The had a plan to build a slumber fort for after the high school football game. Of course this included lighting and privacy panels. Then cousin Nick joined them in the building and they talked through design and function. It was great to watch.  They finished just in time to shove down some taquitos and head to the game.

During the game, Austin, Cinnamon, Toba & Zoey invited me in to watch some favorite shows from the DVR until the girls got back to occupy their slumber fort. That’s when I took the photo of Cinnamon.

Cinnamon is a companion dog in training for Canine Companions For Independence. She is with our family until February and then she goes to finishing school and then on to be a companion, most likely for a veteran with PTSD. She RACES through the house if she hasn’t been walked. She and one of the cats are dear friends, except when Cinnamon has his head in her mouth. Perhaps they are playing Lion Tamer?

About the Author: Toydle Builders

This site uses Akismet to reduce spam. Learn how your comment data is processed.

Order direct from Toydle and get: